A Gorgeous Use of Classic Baltimore Space … Grimaldis at Area 405

Once Again, Again: Rhythm and Repetition at McLea [...]

A Gorgeous Use of Classic Baltimore Space … Grimaldis at Area 405 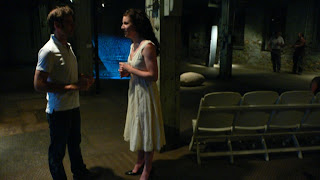 One of the most difficult things about exhibiting sculpture is finding enough floor space in the gallery. Then, once you do, what the hell do you hang on the white walls? It’s awkward. Therefore, it is rare to see a sculpture-only group exhibit, even though what the one forlorn sculpture in a typical group show usually needs is MORE sculpture – to relate to and reinforce one another.

This problem is completely and elegantly solved in the unusual collaborative exhibit between Grimaldis Gallery from Mt. Vernon and the edgy Station North warehouse space, Area 405. Gone are the white walls to fill, gone are the cramped, pristine spaces we’re used to, and gone is any sort of arty stuffiness or faux politeness. In their place, we have a cinematic and vast cavern, full of velvety dark corners and aged wall surfaces, punctuated by spot lights. This is a space where you actually can step back and appreciate a sculptural form in its entirety, and in context with other works, with ample breathing room, so the works really come to life.

This is a space which can be half-assed, too, depending on who’s exhibiting there, which has finally, happily met its match in expert curating and sophisticated floor work. This is a space with a bar and a loading dock for smoking cigarettes, with artist studios in the back. Gone are those god-awful Charles street parking meters, too, a curse and a blessing both, because you’re not sure if your car will still be outside when you leave. It’s a fair price to pay for such a high-caliber show in the perfect environment.

The exhibit is full of large and muscular sculptures, made by many of the top names in the area, including Chul-Hyun Ahn, Sir Anthony Caro, Maren Hassinger, Jene Highstein, Christina Iglesias, Jon Isherwood, John Ruppert, and John Van Alstine. You can see works by most of the same artists at any high-end international art fair, or in any major art competition in the region. However, this exhibit is about a million times better than either of those environments, for a great many reasons. For one thing, the works are not competing with one another. Despite huge sizes, industrial materials, and a downright macho aesthetic, the sculptures in this show harmoniously lead you from one to the next, and back again. Part of this is the abundance of space in the warehouse, but the other part is more magical. It’s as if these particular sculptures were made to be seen here: their surfaces, textures, colors, and materials all relate to the building itself. The building lends the work some of its gritty, imperfect charm and the sculptures lend the building a pace and a rhythm.

Many of these artists work with a variety of materials, and it’s no accident that the works shown here have an industrial edge to them. Ahn’s mirrored optical illusion utilizes a cinderblock frame, which unify it with the unfinished plywood floor. It feels grounded and credible here, and dizzyingly deep. John Ruppert’s chain link orb with projected video glows out of the center of a huge dark void. Surrounding human-sized rocks ring the piece, which appears to move and undulate, with strategically placed spotlights doing much of the work for it. Trying to picture the same piece in a bright gallery, or in the median strip at artscape is downright depressing. The collaboration between the piece and the space is a stunning success, both elegant and creepy, solemn and mechanical.

Some of the works in this show are centerpieces and others act as transitions. Christina Iglesias’ steel planks, leaning against a side wall, acts as both a bridge and a barrier. Placed in the center of the space, her work would be more aggressive, more phallic. Again, the lighting and the brick backdrop add something to the work, or possibly soften it in an attractive way. The dark metal bands with a subtle patina, as well as the high contrast shadow-stripes on the walls behind them, come together to define a space that is intimate, not exactly inviting but not threatening either.

Area 405 is a uniquely rich space. It’s a great place to throw a party, to rent an art studio, and it’s an amazing place for people watching. However, until this exhibit, I don’t think that Area 405 had met its match, curatorially. Typically, wall work gets lost here – it’s an awful place to hang paintings.

Whenever you go to an exhibit and find no immediate sore thumb, you know the curator is doing something right. Like the most sophisticated work, it’s about what you leave out, not how much you can cram in. This synthesis between form and function, between parts and the whole feels organic, something that can’t be forced or faked. There’s an inclusive conversation that unfolds between disparate works here, from one piece to another, and from the building’s structure back to the work; all this strengthens the group as a whole, as if it is just one seamless installation piece. And that’s downright impressive.

Fly away, little sparrow! This post is dedicated to the Sparrow, who’s all grown up now, with a job in Georgia to boot. We’ll miss you and all your shenanigans!

He could have easily written beautiful and empty things, instead his life's work was naming racism and calling out the art world’s whiteness.

News & Opinion
The Internet Is Exploding: 10 Must-Read Articles This Week

The internet was chaotic this week, but patterns are also starting to emerge.

News & Opinion
Fever Dream: Symptoms, But No Covid-19 Tests and No Results
It took eight days of coronavirus symptoms and a trip to the ER to get a test

The US has known about COVID-19 since January. Why are there not enough tests?

Film
Bloody, Radical, Postcolonial Revenge
Bacurau, streaming via the Parkway, will make you wanna start the revolution—if only you could leave your house

The town of Bacurau fights back, they do some damage, and it feels like a victory for its characters and for viewers, a blueprint for imminent direct action and self-defense.