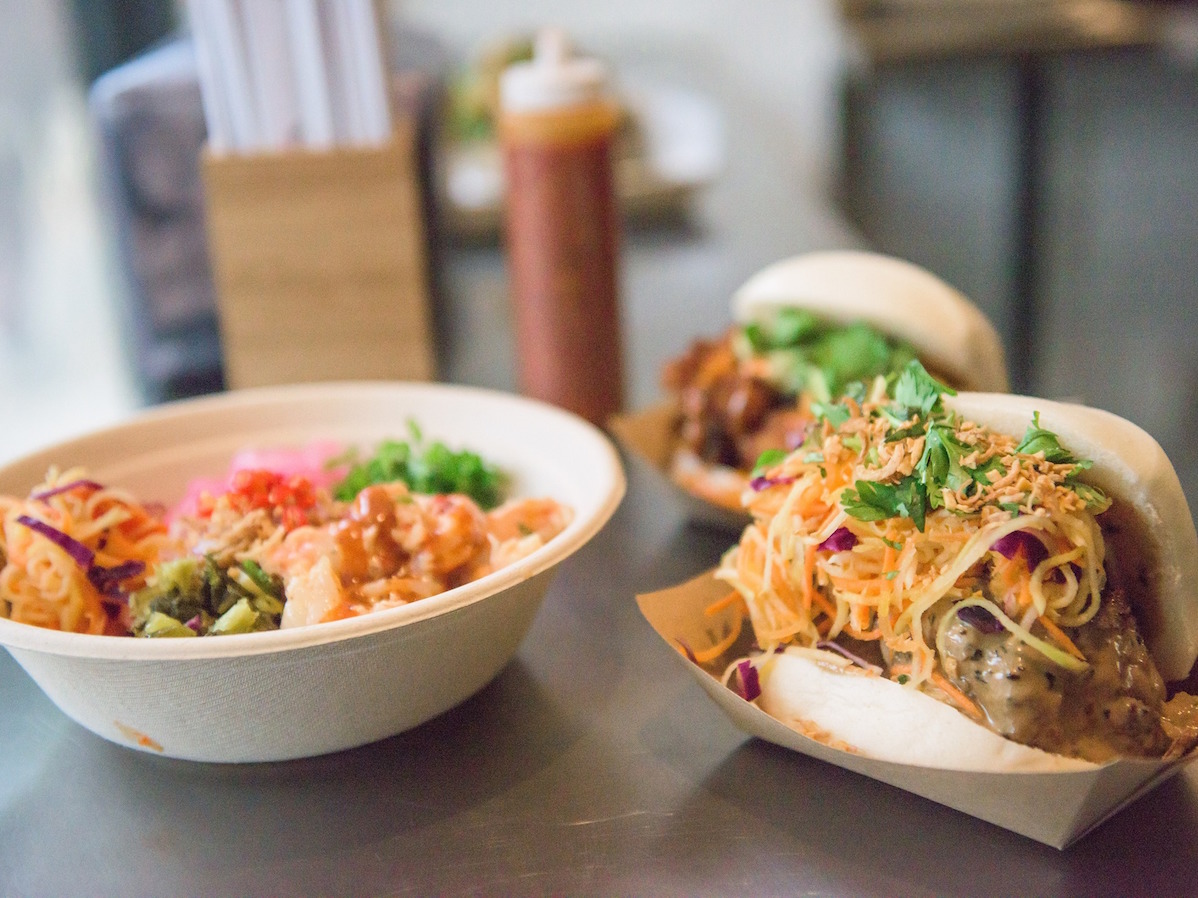 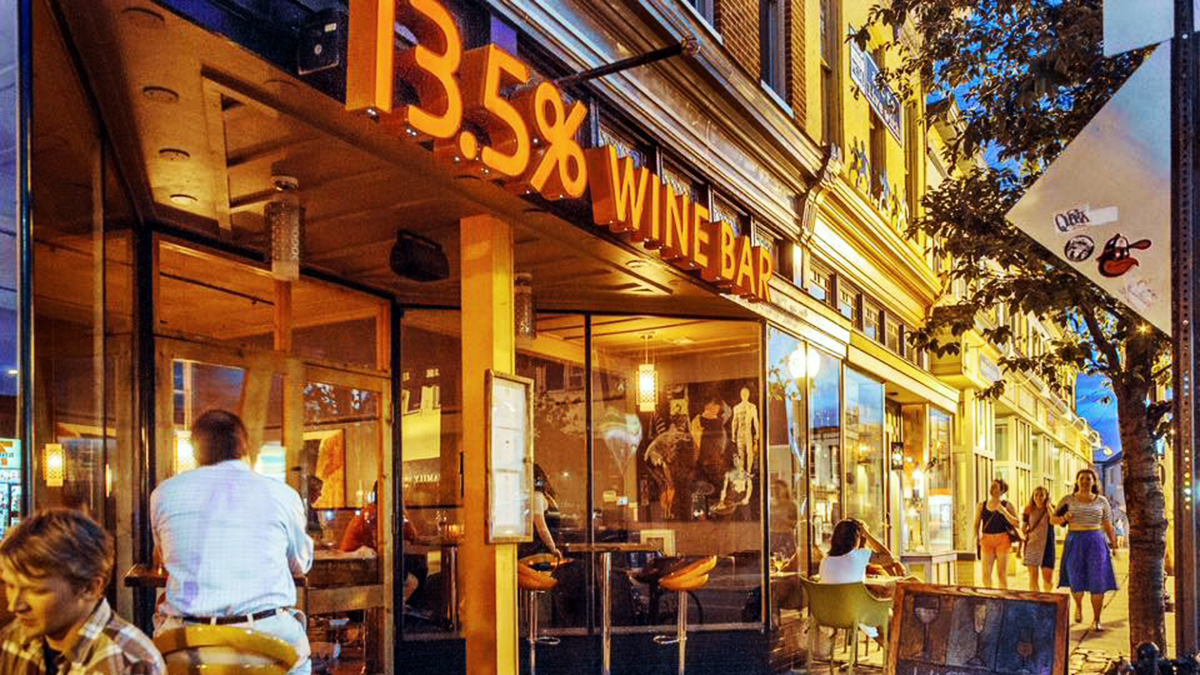 The LUSHious Ladies of Baltimore Burlesque 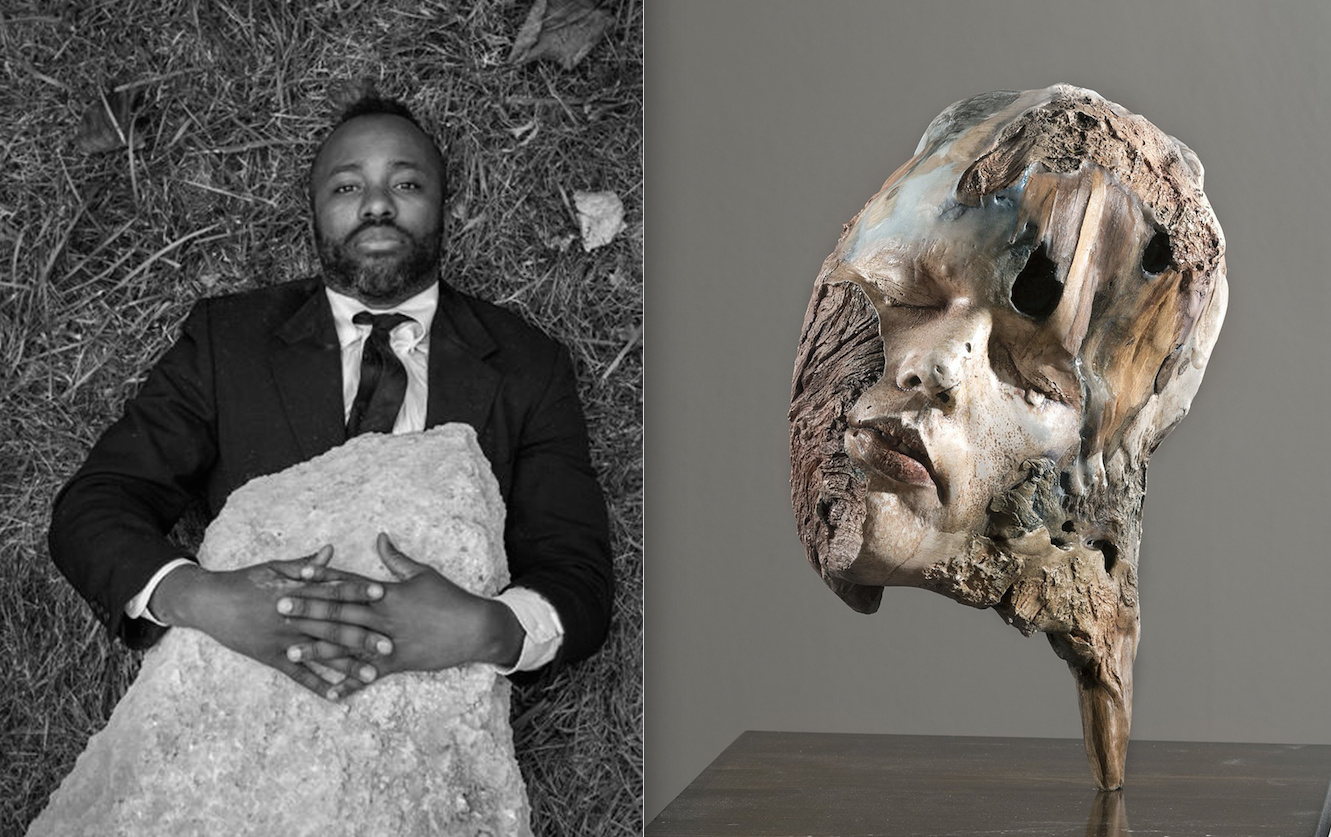 The Timeless Tradition of the Self Portrait Reinvented by Contemporary Artists

It’s difficult to question the significance of an artist’s self portrait in a world inundated with selfies. We’ve reached a point where it’s easy to dismiss anyone’s attempt at self depiction as vanity or propaganda, despite a rich tradition of art historical precedent.

Thankfully, the group show called In My Likeness, exhibited at Goucher College’s Silber Gallery and curated by Gallery Director Laura Amussen, featured works that successfully opened a dialogue around the self portrait, especially for those who have typically fallen outside the art historical cannon. The show brings together six artists who posit themselves as the subject of their work, but do so in order to raise questions around a variety of contemporary issues, giving the viewer pause to reexamine what a self-portrait can accomplish.

As an artist who has often depicted myself in my work, I was asked why all the time. Placing myself into the position of both artist and subject, I could explore being the storyteller as well as the protagonist (or antagonist). I could place myself, if not physically, then mentally, into roles or identities that were not my own. For me, this was a form of play, and through this play I gained new self-awareness. Sheldon Scott explores identity, but one that is historically inspired. As a performance artist as well as a photographer, Scott casts a critical eye “on ideals of exceptionality of the Black Male form.”

The show included three photographs of Scott portraying John Henry, the acclaimed African American folk hero. Although this work stems from “A Man Ain’t Nothin But A Man,” performed in 2014 at the (e)Merge Art Fair in Washington, DC, the photographs are thoughtfully choreographed and composed studio shots.

Both the performance and the photographs challenge the positivity of the story of John Henry, a man who overcame what was considered impossible, but inevitably died in the process. Scott challenges that the black body is extraordinary, but ultimately expendable in our culture.

In the photograph titled “Man,” Scott, dressed in a full suit, is being pinned underneath a slab of concrete. During the artist talk I discovered the concrete slab weighed 500lbs. Can you imagine having 500lbs of concrete on you? Scott said he had about 90 seconds to get an image before the pressure of the slab would present an emergency. What makes the resulting photograph captivating is Scott’s body language. He is peering up from the ground, with his fingers casually interlaced atop the 500lb slab which is positioned atop his body, and he is not wincing, or screaming, or even looking remotely uncomfortable.

During the talk, Scott explained that the concrete represents the “constant pressure and weight of blackness.” As a white person, I can never properly imagine what this weight or pressure feels like, but I can imagine what 500lbs of concrete feels like. Providing the viewer with this allegory, that he takes upon himself, Scott helps us to begin to attempt to comprehend that weight. Alessandra Torres is another artist who combines performance and photography. Torres explores her physical place as a woman in the world, accentuating her gender by performing naked. Rather than being sexual, Torres’ nudity creates a vibe of playful investigation, channeling that childhood phase where we ran around naked before becoming too self-conscious.

The show includes pieces from her “Personal Space” series, in which she interacts with the architectural elements that are present in her home environments. The series spans several spaces where Torres has lived, and her images range from hanging from the steel beams of her Creative Alliance loft to climbing up into the top shelf of a closet in a Bolton Hill apartment. How she is engaging with these spaces is not entirely natural, in that a person (at least an adult) does not normally try to crawl into the top shelf of a closet.

The beautiful absurdity of it can really give you pause, and perhaps make you question your physical relationship with the top shelf of your closet.

It reminds me of the time I had to squeeze behind the boiler in my basement to paint Drylok on a weeping wall. It was a space I never wanted to experience. I have a fear of spiders (which are rampant behind basement boilers) and I get claustrophobic. The experience of squishing myself into that space gave me ownership of it. What previously looked uninhabitable became familiar. Torres wants her audience to consider how we can form a physical connection with all of our surroundings. By presenting to the viewer images of herself having these investigations, she welcomes and challenges us as an audience to question, be aware of, and seek out our own physical investigations. The two painters in the show, Mequitta Ahuja and Kyle Hackett, both rely upon the history of art to explore identity. In Ahuja’s large, colorful and lushly textured paintings, she positions a woman of color, herself, in the center of the figurative painting tradition. She calls her work an intervention, in that she is following the historical tools of representation, such as one-point perspective, but is rewriting the scene. Throughout the history of art, women are generally depicted as either virgins or prostitutes.

In her piece “Performing Painting: Birthday,” she is presenting a rebuttal to that history by depicting a woman celebrating her 40th birthday. In this particular painting Ahuja is specifically referencing Picasso’s “Les Demoiselles d’Avignon.” In Picasso’s painting, five nude prostitutes are parading themselves to the viewer. In Ahuja’s painting, three women, fully clothed, are relaxing in a room, quietly celebrating.

The contrast of narrative between the two paintings is monumental. Ahuja is presenting an intimate scene that is rarely depicted in a figurative painting, but one that is a true representation of life. When you listen to Ahuja speak about her work, or read any of her artist statements, it is clear that she has an admiration and respect for the formal tools used in traditional figurative painting. To use these tools to upend that tradition, and to use herself as the agent of that upheaval, she challenges the viewer to question that history and to seek our own decisions of what narrative a figure painting should present. Where Ahuja is addressing the compositional and narrative traditions, Kyle Hackett focuses on the physical application of paint by deconstructing the traditional seven layer Flemish process. In this process, in the step delightfully called the “dead layer,” the painter works out the form of the image in grayscale. It is thought that working purely in tonal values, without the disruption of color, allows the painter to render the form more accurately. Hackett’s paintings are in the “dead layer” stage, but they are not moving forward into the next stage where color is introduced (which I really wanted Google to tell me was called the “life layer” stage, but it did not).

Hackett mentioned during his artist talk that he made this decision to purely understand form, but I believe we are also meant to remove the associations color presents. Hackett is an African American artist who is painting his skin in grayscale. In the show, he displayed a series of self-portraits. In his “Approbations” portrait, his larger than life figure stands facing and confronting the viewer in a very proud manner. In his smaller portrait series, his face is crumpled up and peering out from piles of trash. These are two very different ways to depict oneself.

The trash portraits are done from throwaway photographs that he took for painting references that were not good enough for a larger painting. In his statement he discusses the “tension between self and the constructed image.” In the modern times of selfies and social media, we are all constructing our own image. It is a formidable idea to be investigating this construction through the time-consuming process of traditional portrait painting. As a viewer, I feel that I am privy to an intimate and vulnerable exploration of self. Michelle Dickson, Neither Mine Nor Yours, 1, plaster, driftwood, birch plywood, oil paint, and encaustic, 2015

Placed in the center of the gallery on pedestals, a row of Michelle Dickson’s sculptures from her “Neither Mine Nor Yours” series employs plaster, driftwood, oil paint, and encaustic wax to explore mortality and memory. In her artist statement, she writes that she is attempting “to reveal the thin lines that separate presence from absence, tension and release, the beautiful and the grotesque.” Gnarled driftwood resembles exposed muscle underneath smooth plaster skin, signifying the deterioration of the body, one that is often not a pretty sight in reality.

Through her deft use of materials, Dickson transforms the aging process into a breathtakingly beautiful thing.

During the artist talk, she explained that her process is entirely experimental. She builds up the pieces in several steps, using many plaster molds, or pieces of molds, effectively holding a replica of her face in her hands, to manipulate and destroy and form again. It is interesting to think about the process she has of layering the surface of each piece when all I can perceive is a stripping away. Thinking about Dickson’s interest in memory, the stripping away of the recognizable self is a visually powerful way to address the concerns of time on identity. Passage of time inevitably leads to the end of life and also eventually loss of remembered life. Julia Oldham, still from “In the Beginning There Was Nothing”, 2015, HD video and animation

Julia Oldham creates videos that mix live action and hand drawn animations into her own mythologies, where she performs the role of both narrator and protagonist. Myths are used by cultures to explain life, and why the world around us works the way it does. Through her videos, Oldham desires to “understand the unknowable and transcend humanness.” She attempts this technically by blending a representation of real (live action video footage) with the invented (hand-drawn animation), in an effort to make the “impossible visually possible.”

In her video “In the Beginning There Was Nothing,” Oldham presents a retelling of the Big Bang through the focus on the four bellies of a giant elk. She is taking scientific theory and reformulating the narrative, and she sings this narrative to the viewer while creating rhythm through the snapping of fingers, and clapping and tapping of hands. Just like Torres and Scott, performance is a key element in her work. The artist considers the Oldham presented in her videos as a fantastical self, one that can transcend a scientific reality. Imagine all the stories told by the cultures of the world. Stories told to inform and explain and give meaning. When science comes along with a proven theory should we dismiss our storytelling? Oldham doesn’t think so. She thinks there is a potential to “translate scientific theories into emotional narratives.” As an avid fan of storytelling, I agree.

Author Erin Fostel is a Baltimore-based artist, writer, and connoisseur of city life.

In My Likeness was exhibited at the Silber Gallery of Goucher College from June 21 to August 14, 2016. Additional exhibition information can be found here. 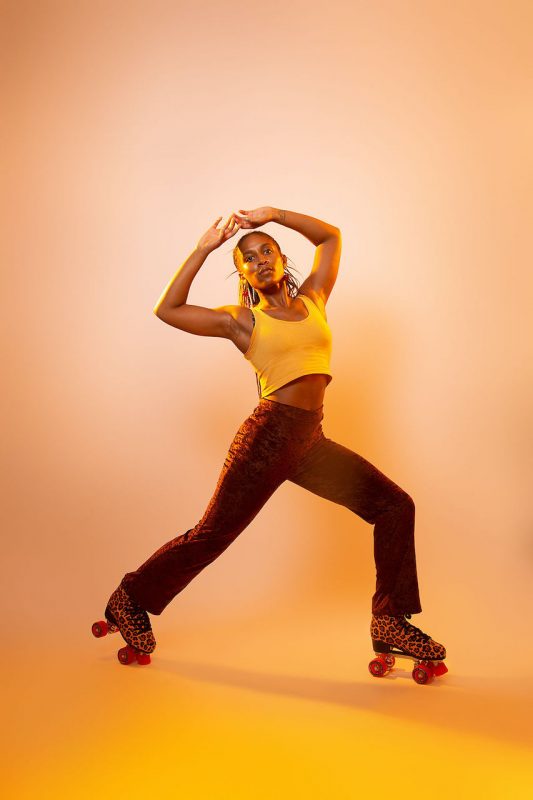