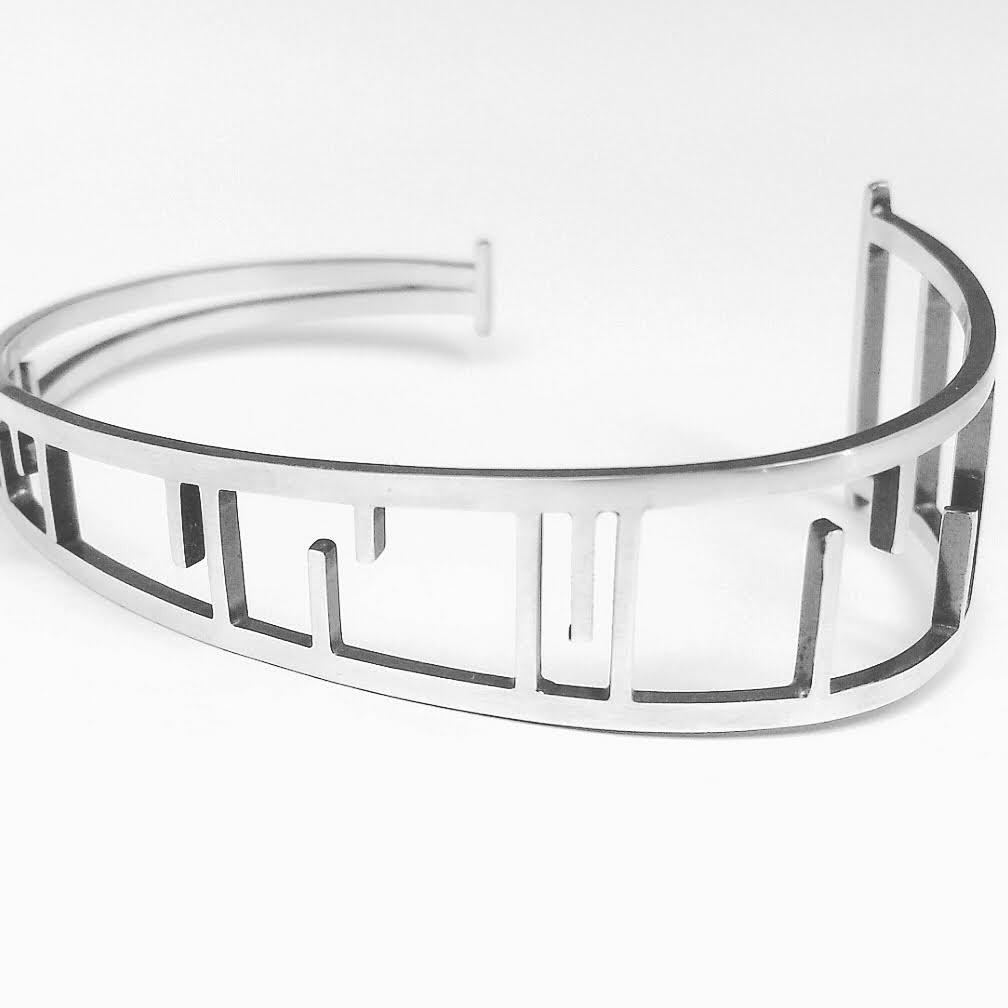 Not So Heavy Metal: 10 Questions for Hilary Hachey 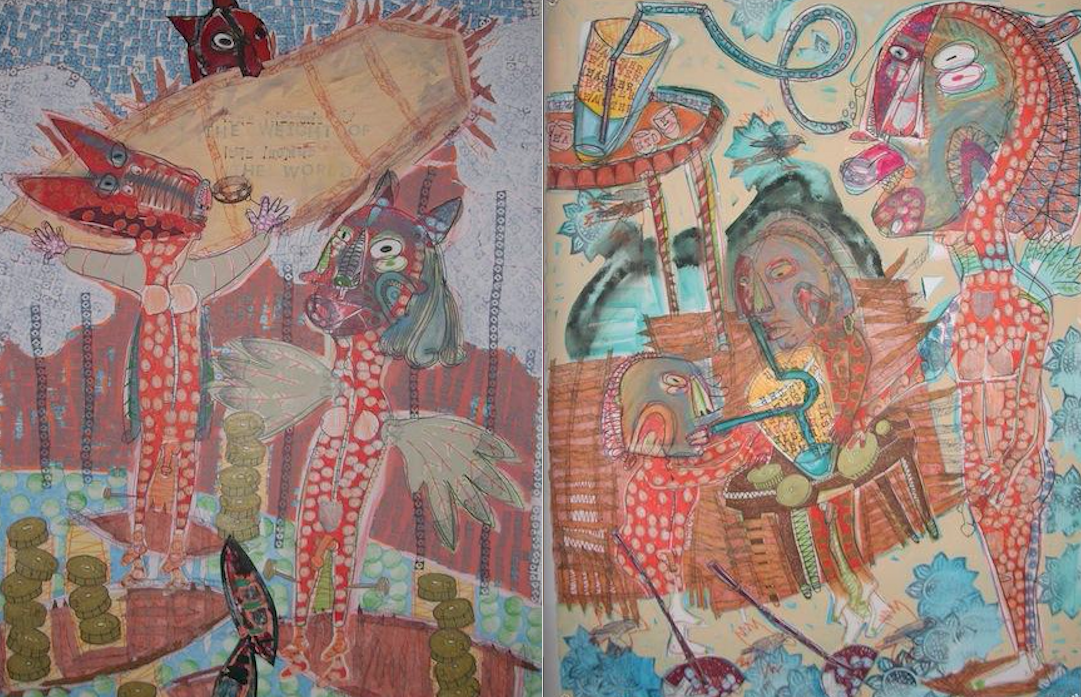 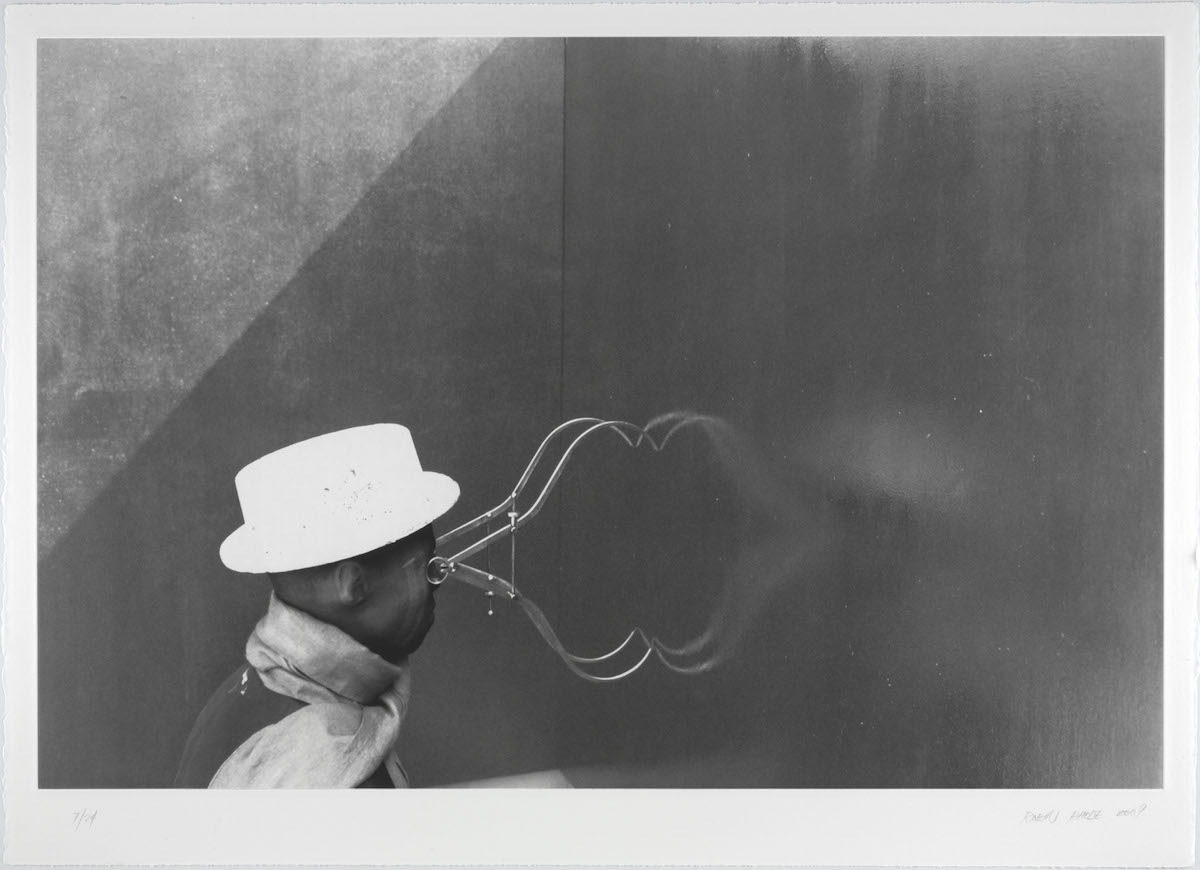 Let’s start with the good—it’s encouraging when major regional museums show recent work by artists from Africa and its diasporas, who have for decades contributed some of the most technically rich and politically astute art in the contemporary landscape. Beyond that, to see vibrant works on paper by Julie Mehretu of William Kentridge—two of the seven artists featured in the Baltimore Museum of Art’s Shifting Views: People & Politics in Contemporary African Art—is a rare treat. Nonetheless, this exhibition is troubling, confirming as it does that, after several years of turnover, the BMA has not yet found its footing with respect to African art.

This is too bad. Many readers are likely aware that the BMA has long been celebrated for its holdings of 19th and early 20th century art from sub-Saharan Africa, in particular. That collection reflects the turn-of-the-last-century interest in African forms, especially by those who closely followed or championed the work of the European post-Impressionist, such as Albert Barnes in Philadelphia, or Baltimore’s Cone sisters. The BMA’s collection was expanded in the 1950s with the gift of Janet and Alan Wurtzburger, and under the noted curatorship of Frederick Lamp, the BMA became an important node in the study of exemplary works by artists of the Yoruban, Sande, and Kongo traditions.

Over the past five years, the Africa department received a much-touted re-installation, and changeover in the curatorial staff, culminating in the arrival of Associate Curator Shannen Hill in 2015. The re-installation itself added a splashy back wall, useful maps and wall text, and video to add context to some otherwise static objects. For all that, what should be a premier collection within the museum—and one in implicit dialogue with the galleries on the main floor—remains tucked away, behind a warren of temporary exhibition spaces. The Sande masks are quite literally in a hallway. So while resources have been given over to this material, it remains physically marginalized: the current show suggests that it remains so conceptually as well. 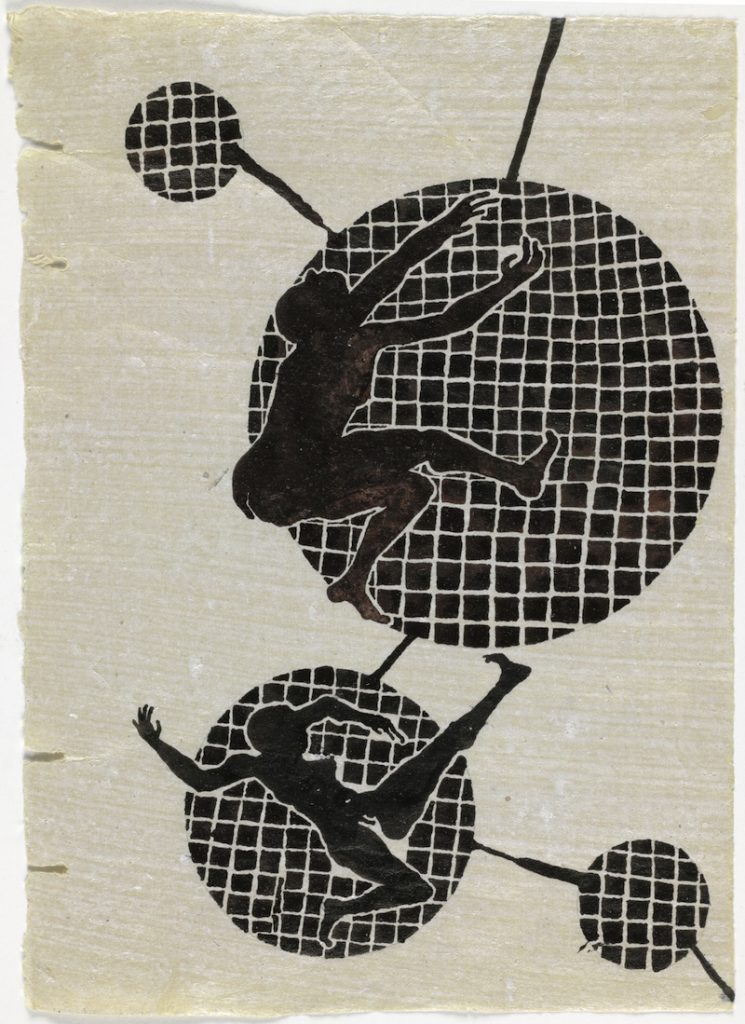 Senam Okudzeto. Fragment from the series All Facts Have Been Changed to Protect the Ignorant. 2000-01. The Baltimore Museum of Art: Nathan L. and Suzanne F. Cohen Contemporary Art Endowment

For its part Shifting Views is displayed in a gallery adjacent to the African collection. It is, in simplest terms, a sampling of acquisitions over the past fifteen years, and a few from 2015 and 2016: mostly work on paper with five photographs by the titan of South African photography David Goldblatt and the Berlin-based Robin Rhode.

Any one of these suites of images would have been a welcome addition to the contemporary collection at the core of the museum, but here the curatorial logic is strained: seven artists, only three of whom work primarily in Africa (Goldblatt, Kentridge, and Diane Victor, all white artists based in Johannesburg); five are identified with South Africa in particular. While Senam Okudzeto and Julie Mehretu spent their early lives in Ghana and Ethiopia, respectively, both were educated abroad, and work primarily between the United States and Europe.

The inconsistency in the museum of what “counts” as African and what does not is not necessarily a problem, but whether an institution acknowledges this and frames their position with intention matters. After all, contemporary African art is a rubric that has long included the diaspora, and the diaspora is, in turn, a zone of shifting discursive and curatorial boundaries. It encompasses African-born artists not working in Africa on one hand, and black American artists of African descent on the other. The issue here is that the BMA itself—a museum partitioned by medium, region, and period—does not seem to have an adequately theorized notion of what curating African art means for the institution. 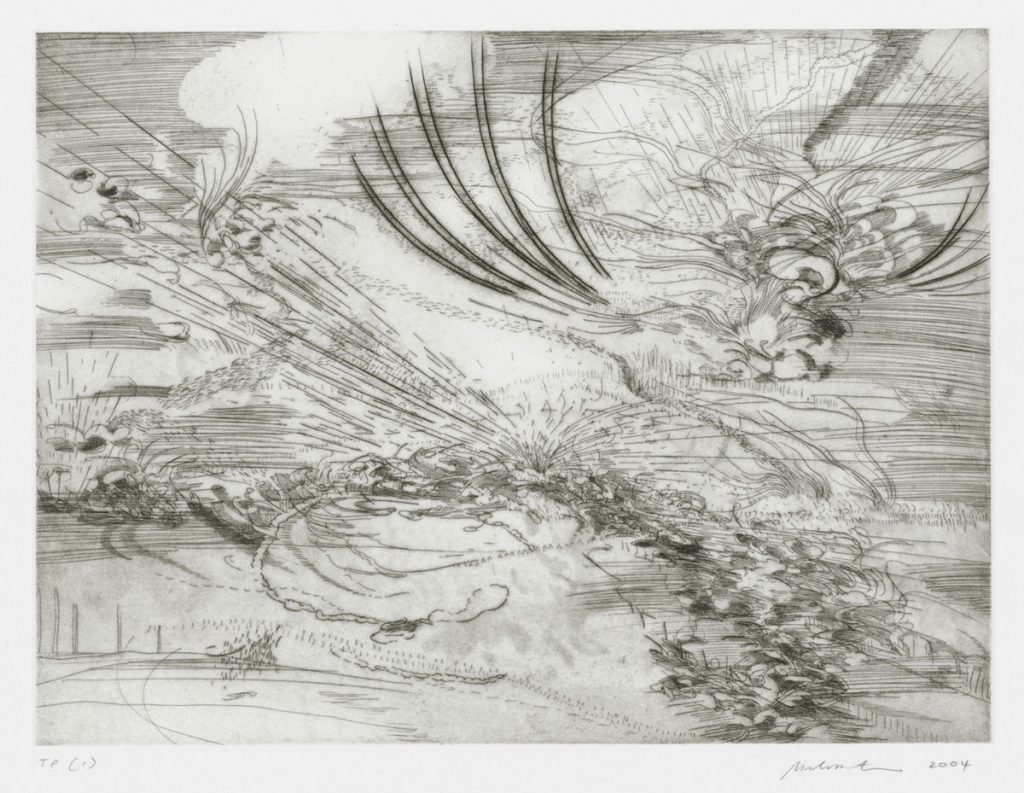 For instance, Mehretu, Goldblatt, and Kentridge are by now among the most notable artists working today, full stop. Mehretu’s stunning etchings (prints that presage her large-scale cartographies of the flows of global capital) or Goldblatt’s 1970 portrait of Soweto singer Margaret Mcingana have, frankly, little to do with each other. But one commonality is that they both operate in fairly clear relation to the photographs, installations, and paintings of the Contemporary wing. To specify and contextualize their placement in the Africa galleries, Shifting Views needed drew meaningful connections between its constituent parts and the other objects in those galleries—to make a case for their dialogue with the art of the continent more broadly.

Alas, it does not. At the same time, back in the contemporary collection one floor up, diaspora artists such as Mark Bradford and David Hammons are featured prominently, and Alison Saar’s 1995 hanging sculpture “Strange Fruit” is compared in its wall text to a Kongo Nkisi figure donated by Wurtzburger.

Such distinctions may seem like fine parsing, but it is precisely the job of the museum to attend to these very issues—to carefully draw objects into relation and to resist, in this case, the conflation of Africa into a monolithic place, or to submerge it to its various histories rather than reflect on its changing contours. 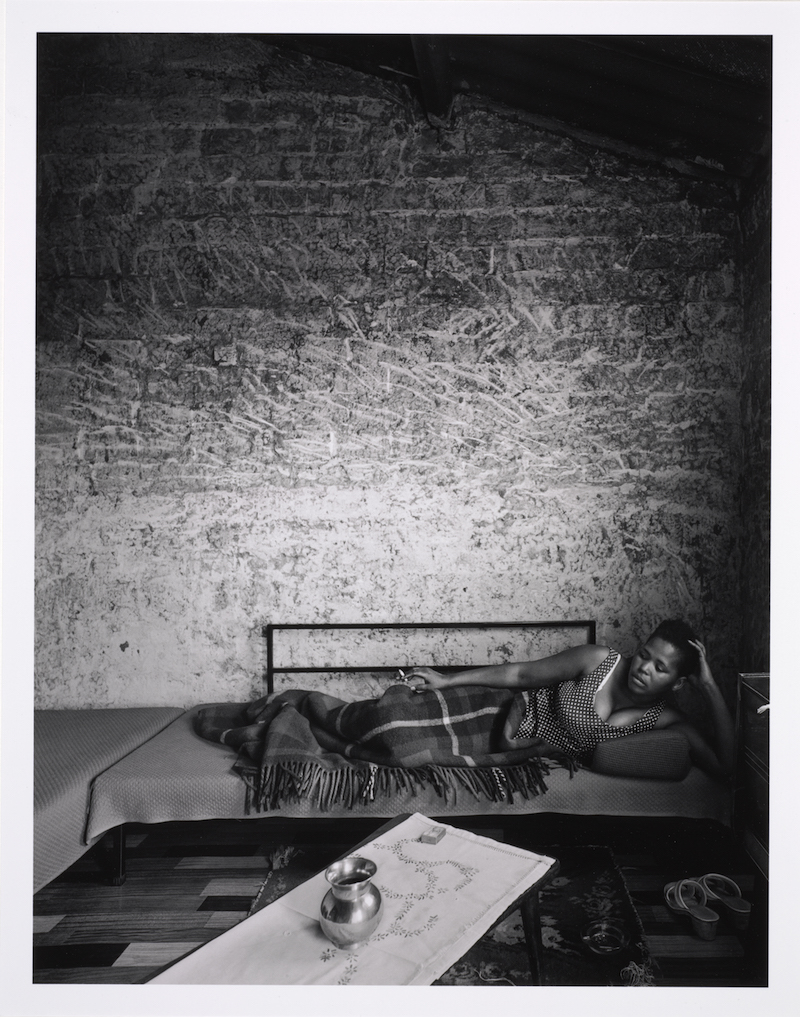 In fairness, the wall text for Shifting Views does attempt to link the seven artists on display with themes of incarceration and violence against the black body. And these are, undoubtedly, pressing questions, of issues that ultimately ramify a deep history of violence, from the Atlantic slave trade forward. Nonetheless, the American legacy of slavery is not at issue in Mehrutu’s or Victor’s work, and the inclusion of Gavin Jantjes’s 70s-vintage “A South African Colouring Book” alongside dated work by Kentridge and Goldblatt collapses past and present with little explanation: what of the past thirty years? How does Apartheid bear on a transatlantic, shared present?

Of course, there are meaningful connections to be had between the American and South African contexts—the latter’s wave of protests in the wake of both the 2015 removal of the Cecil Rhodes memorial at the University of Cape Town and the 2012 killings at the Marikana mine echo renewed struggles for equity and racial justice in the United States. To that end, one can imagine an exhibition that centered primarily on Robin Rhode’s “Pan Opticon Studies” (2009) and connected it with the visual culture of protest and recent explorations of the carceral state (e.g. Ava DuVernay’s film “13th” or Texas professor Simone Brown’s recent study Dark Matters which features Rhode’s photographs and examines the surveillance of black subjects). A focused and tightly researched show built around that one acquisition could have resulted in a powerful and timely intervention.

More generally, the BMA might have considered an exhibition that bridged its African and Contemporary wings, and taken up the curatorial nuances of diaspora head-on, asking what African art means now, and what it might mean in 2017 Baltimore. While Shifting Views is undoubtedly well-intentioned, it is also a missed opportunity. That is unfortunate because it is clear that all the pieces are there for something great.

Ian Bourland is Assistant Professor of Contemporary Art at MICA. He is a scholar of diaspora art and the global contemporary and a contributing critic for a range of leading international publications.

All images courtesy of the Baltimore Museum of Art.

Shifting Views: People & Politics in Contemporary African Art is on exhibit through June 18, 2017.

News & Opinion
Art Basel Miami Beach at Twenty: Bmore Galleries Shine, Madonna Celebrates “Sex” on the Beach, and Hotel Sleaze Makes a Comeback
ABMB Just Started the Countdown to its 21st Birthday, but the Champagne Has Long Been (Over)flowing

What better way to animate a theatrical building with a unique history than inviting a group of artists to make site-specific work?

Three Succinct Reviews including a group show about death in a former funeral home, as well as figurative narrative paintings from established masters Grace Hartigan and Raoul Middleman and a new generation of painters in Baltimore