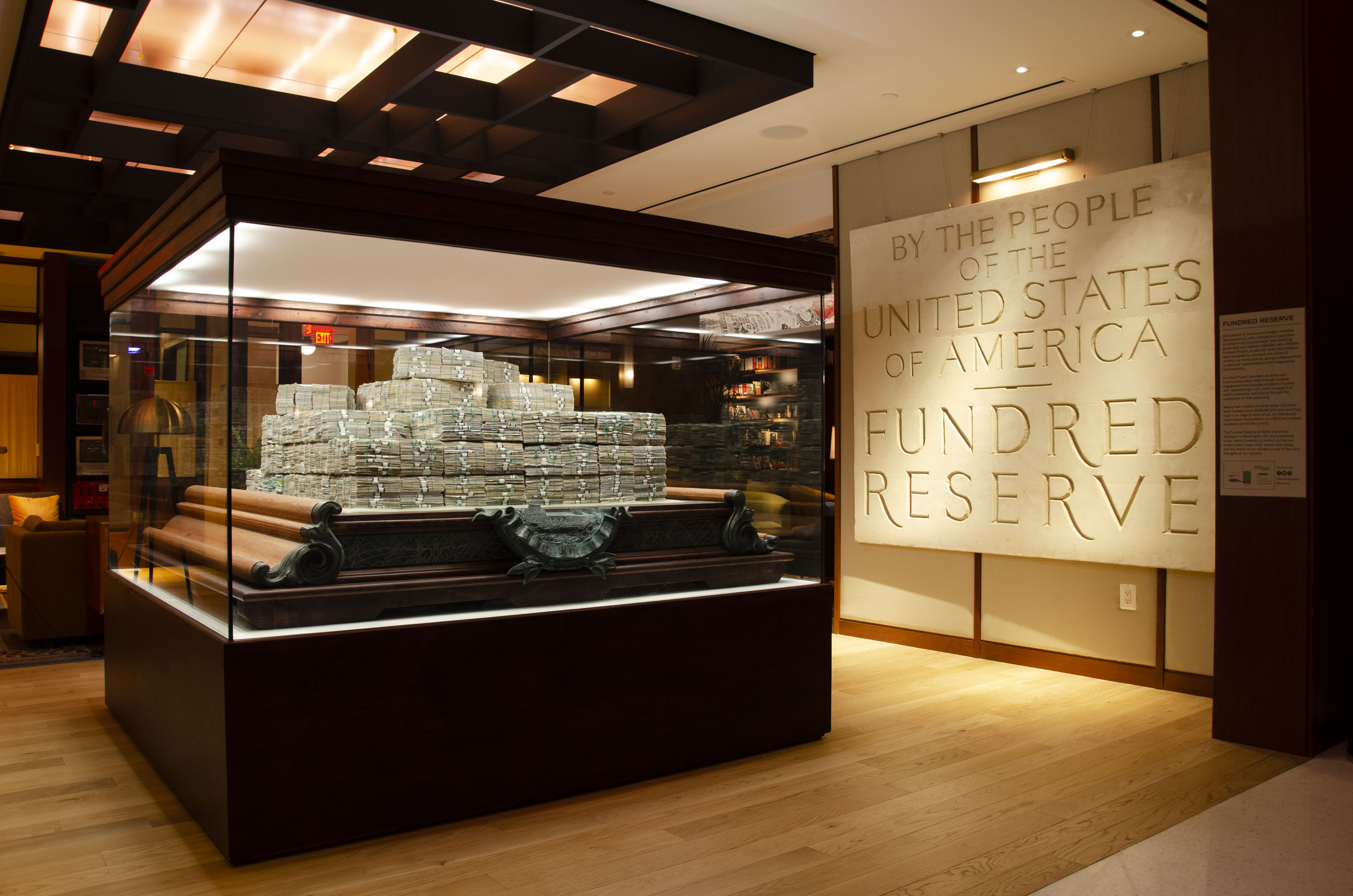 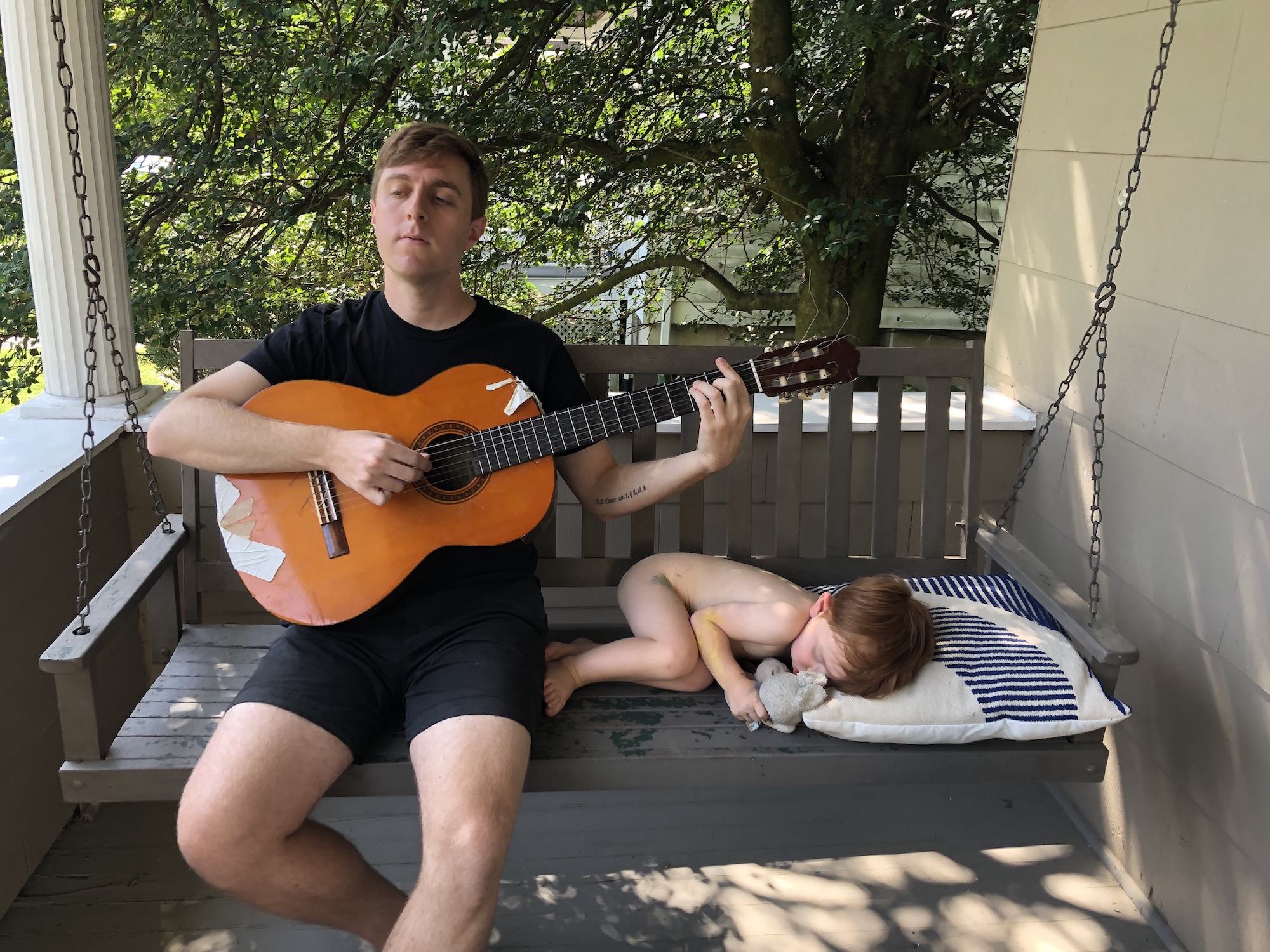 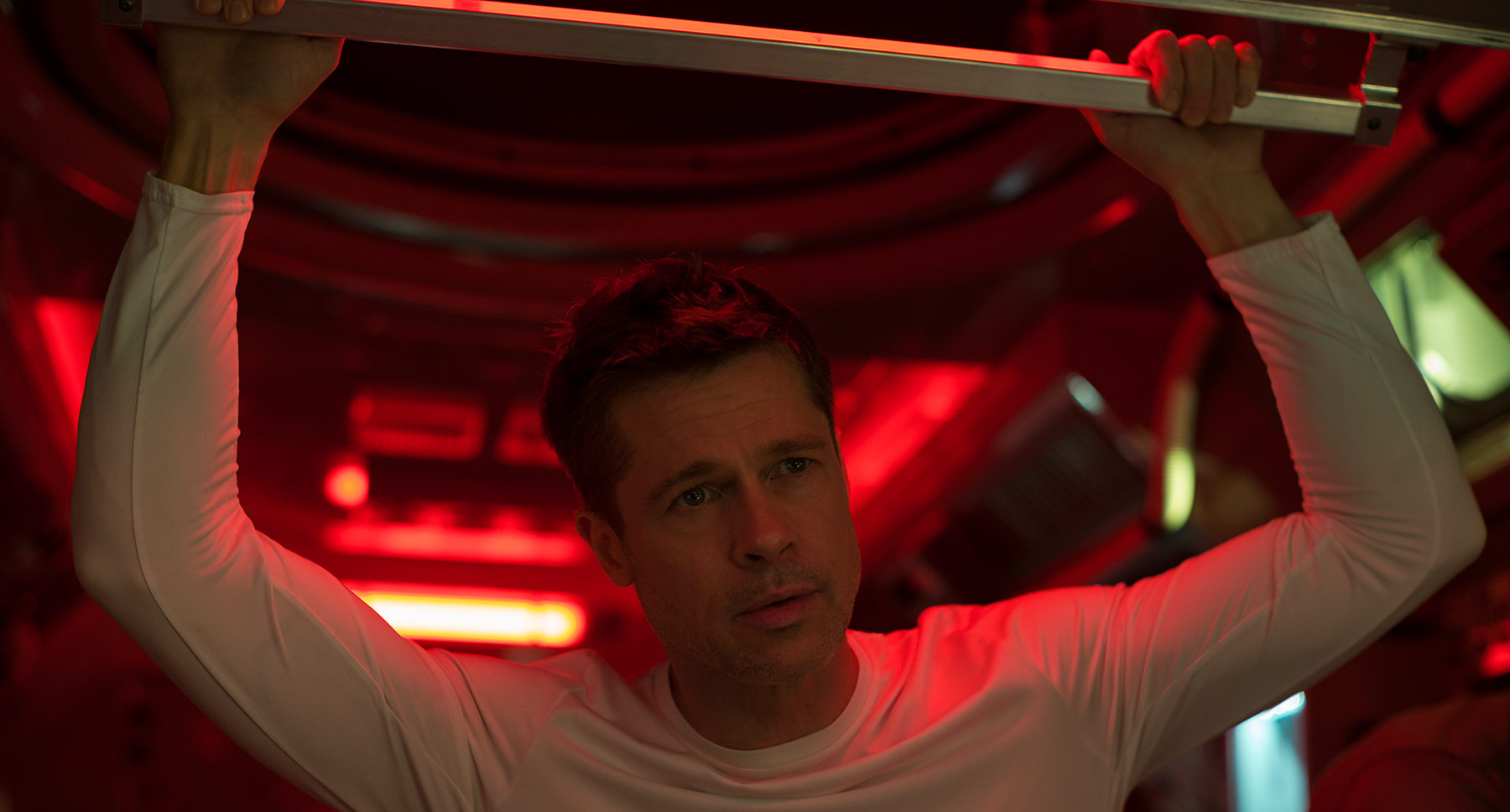 Immersive, like a Cinerama screening of 2001 in 1968 or like that Terminator 2 ride at Universal Studios in the early ’90s, James Gray’s Ad Astra (now screening at the Senator Theatre) is an especially existential space picture extracting ayahuasca-trip truths and busting up serious sci-fi presumptions in the process: heroism is a sort of pathology; masculinity has hit a wall and it is soul-killing and civilization-destroying; and space exploration amid the climate crisis and neoliberalism binds research to commercial expansion which will result in exporting our problems to another planet and nothing more.

It is the near future and it is a lot like our present, only now there’s an Applebee’s on the moon and commercial travel into space. Roy McBride (Brad Pitt) is a notoriously cool, calm, and collected astronaut and, more importantly to everybody who meets him, the son of Clifford McBride (Tommy Lee Jones), the most decorated astronaut of all time who disappeared about 16 years ago as part of an ambitious project looking for alien life. Roy thought his dad was dead but then the military says he is probably alive and likely sending electrical surges from space that are shorting out technology and killing thousands of people on Earth. They think Roy can get in touch with his father and convince him to stop and if that doesn’t work, well, they are going to bomb the hell out of him wherever he is out there near Neptune.

The trip to dad is a pulpy picaresque where pretty much every 20 to 30 minutes, some wild, Buck Rogers-meets-Heavy Metal sort of shit happens: A surge causes a structural collapse invoking both September 11 and The Incal, sending astronauts falling to their death; space pirates roll up on Roy and others on the dark side of the moon; space apes abused in science experiments attack some astronauts; there is a zero-gravity knife fight and later, a deep sea dive in a space suit.

So many movies about space focus on loneliness, solitude, and Ad Astra does that too, but it also tells its hero, “this is on you, dude.” Between staggering setpieces—with our characters climbing in and out of terrifying deep blacks and illuminated by dentist-office whites or honeyed, golden light—we watch the slow unhardening of Roy McBride. “I’ve let people down,” he announces, alone, on his way to Neptune. “I’ve been harsh when I should have been tender.” His concerns are all communicated to us through interior monologue (it’s not really narration because it rarely explains anything plot-wise—“I should feel something,” he admits early on) and through one-sided conversations he has with a computer that psychologically evaluates him to determine if he is fit to continue his trip or not (he is only deemed unfit when he is vulnerable). There is some dark, desperate comedy to how deep Roy gets when the machine asks him how he’s doing towards the end. Had our astronaut hero gone to talk therapy, like most men should, Ad Astra suggests, maybe he could have avoided a risky trip to Neptune to get a little more mindful and made an end-run around the thousands-of-years-old tradition of the hero’s journey? 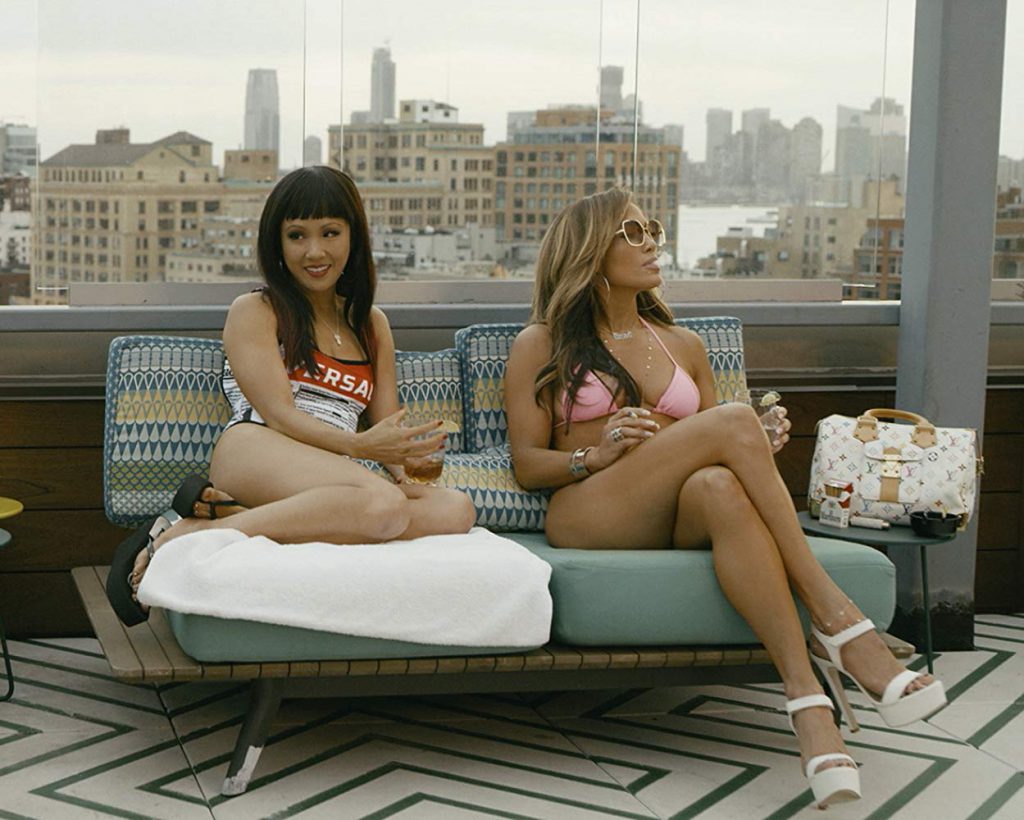 Hustlers (playing pretty much everywhere—see it at Next Act Cinema Pikesville), a Hollywood movie about a crew of strippers who take wealthy Wall Street types out, knock them out with a cocktail of Special K and molly and steal their money (based on a true story by the way) is out while a serious conversation about women and consent in Hollywood touches the mainstream. Sure, by the end, this Goodfellas-esque romp offers up consequences and regret—a few of the dorks they ripped off weren’t so bad, especially the guy with the son with autism—but the movie isn’t afraid to pretty much say, “Look, drugging men and taking advantage of them is just different than drugging women and taking advantage of them and what these women do is actually maybe good praxis?” These men have it coming because they are men, and also because so many of them caused the financial crisis of 2008 which destroyed the economy, which is why some amoral flim-flam like the one Hustlers details happened in the first place.

Director/writer Lorene Scafaria lets this story remain relatively low stakes and breezy, which Serious Film Men might mistake for a lack of ambition but really, it’s just that when a moment matters, it’s because it matters to our characters. Rhapsodic joy or devastation is displayed through clever, counterintuitive music choices and camera moves: Lead scammer Ramona (Jennifer Lopez) first appears dancing to Fiona Apple’s “Criminal” and later, a montage of men getting robbed is set to Scott Walker’s dark and jaunty Jacques Brel cover of “Next” (the whole movie is funny and mean and true; imagine a Brel song with a Gangsta Boo guest verse). Stripping as labor in Hustlers is reinforced through fidgety cross cuts of investment bankers and inside-traders in the office and dancers in the club. A lengthy single take follows Destiny (Constance Wu, the real standout performance here; she has to be impressed and nonplussed in every scene and its moral center on a sliding scale) through the strip club, and is echoed later when Destiny walks across the street to pick up her daughter, left with a neighbor longer than expected after a tragicomic night scamming. 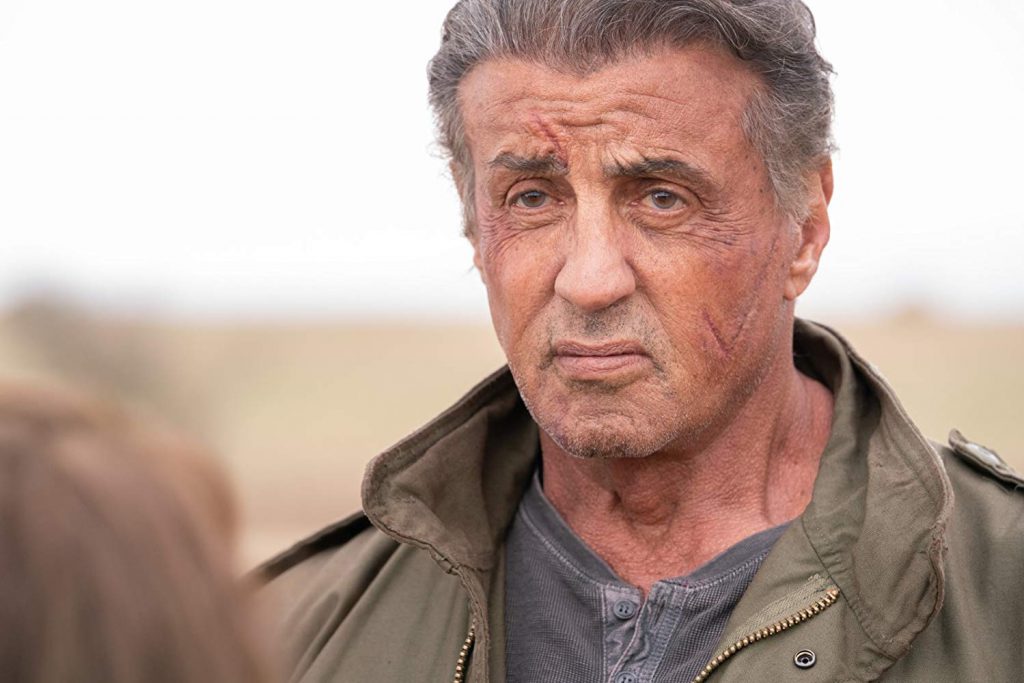 I watched Rambo: Last Blood, a movie that should not exist, on a shady Russian streaming site, the movie recorded with an iPhone off the screen in a multiplex somewhere and uploaded to an ugly, likely identity-stealing website. See, I am not paying money to see a murderous mash-up of Home Alone and Sicario where an aged Sylvester Stallone (he sorta looks like Marty Stuart in Ken Burns’ Country Music) updates a franchise for the Trump-era. Here’s the other thing: First Blood, the first in the Rambo series, was one of the last gasps of character-driven, sad-sack, anti-authoritarian ’70s cinema (I have written about First Blood at length). The villains in that one are all cops or state troopers and the US government itself (in Rambo: Last Blood they are Mexicans) and John Rambo methodically takes them all out. At the end, he cracks and Stallone, who can be downright Brando-esque when he feels like it, cries out, toxic masculinity way past its breaking point, stupid and powerful.

The next three Rambo movies were dumb fun at best, though they all carried with them a certain contrarian view of international politics (politicians’ contempt for those who wage their wars in First Blood Part Two; the Soviet-Afghan war in Rambo III; Myanmar’s Saffron Revolution in Rambo) that zigged when it could have just zagged. Rambo: Last Blood though, a movie about an old white man murdering a bunch of Mexicans, is hateful and half-assed. When it lands on a good point, it’s almost by accident. Trump’s wall comes off as ineffectual in Rambo: Last Blood, though that speaks more about this movie’s “bad hombres” idea of Mexican people than the fact that our president is a moron. 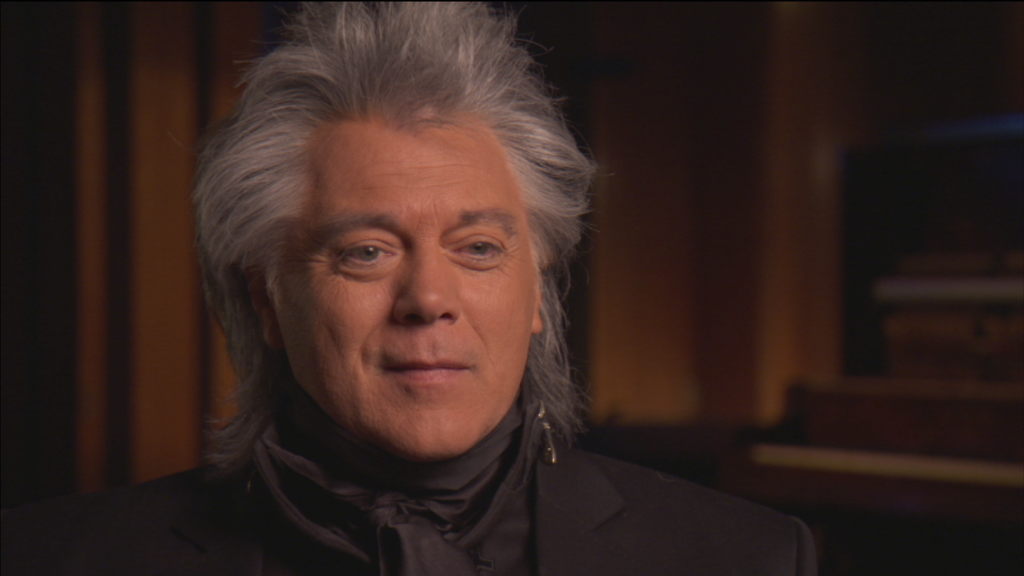 Marty Stuart (who kind of looks like Sylvester Stallone in Rambo: Last Blood) in Country Music

For more credulous Americana there is Ken Burns’ Country Music, which just aired on PBS. Country music, that sloppy, jittery, affecting white working class genre fueled almost entirely by maniacs (and the almost entirely ignored Black folks that showed these wild-eyed rednecks how to make the music) has never seemed so boring. Marty Stuart (who kind of looks like Sylvester Stallone in Rambo: Last Blood) is one of the many voices Burns leans on and as a result, the narrative here is staid and naive. Burns gestures plenty towards country’s musical miscegenation and that’s crucial, but his belief that this broken country’s contradictions mean much of anything is a hard sell (it’s far less telling than he thinks it is when we learn Fiddlin’ John Carson performed at both KKK rallies and Communist gatherings) and his straight-down-the-line, all-facts consideration of history no longer works—especially when these 16 hours wrap up in the mid-’90s not long after The Year Garth Broke and before country’s jingoistic post-9/11 turn, very much a part of how we got Trump. What are these ponderous, endless Burns documentaries doing if they aren’t telling us all how we got here? Amid recent nuanced country excoriations like The Highwomen’s self-titled album (every bit as tasteful as Burns’ filmmaking but palpably powered by the thrill of revanchism), Natalie Weiner’s country music journalism, and Tyler Mahan Coe’s Cocaine and Rhinestones podcast, Country Music comes off as an evasive epic. 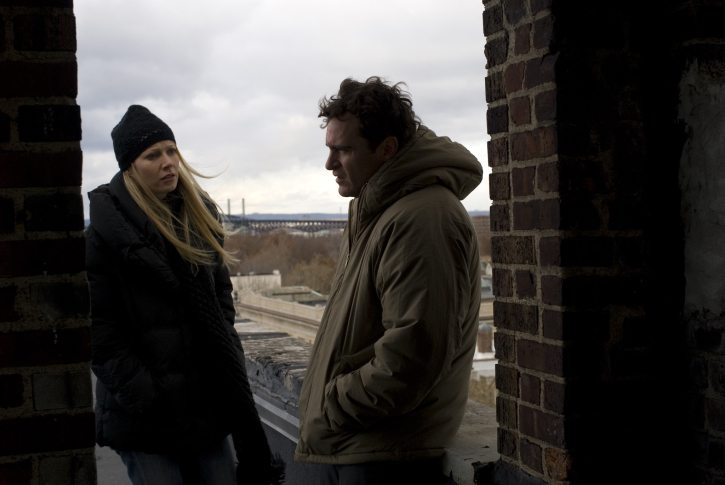 As will always be the case, in an attempt to counter the very convenient though inarguably movie culture-killing world of streaming, I have limited these recommendations to movies that are available at Baltimore’s nonprofit video rental store Beyond Video (2545 N. Howard St.) and movies screening in Baltimore.

Futures (Un)Known at the Parkway: A series throughout October, November, and December screening science-fiction movies (Gattaca, The Matrix, Arrival) and one science fact movie (Particle Fever) and pairing those screenings with discussions led by Hopkins professors.

Goodfellas (Martin Scorsese, 1990): Both Hustlers and Goodfellas are dark comedies, vehicles for character actors to take the lead, and amoral indictments of the bougie morality of the straight world and fwiw, many of the problems with Hustlers are also problems with Goodfellas.

Jazz (Ken Burns, 2001): Particularly the third-to-last episode “Risk,” which with its focus on Charlie Parker and Billie Holiday explores pain, mania, and joy in a way Country Music never quite pulls off, is worth a watch even if you don’t want to endure the rest of Burns’ compelling and very Conservative celebration of jazz.

Rolling Thunder (John Flynn, 1977): If you want something brutal and ridiculous, skip Rambo: Last Blood and rent this Paul Schrader-scripted revenge flick in which a Vietnam vet who ends up with a hook for a hand kills a whole bunch of people—without the xenophobic catharsis.

Two Lovers (James Gray, 2008): Gray is one of the best directors working and he is profoundly underrated, so just rent all his movies but start with Little Odessa or this one, which Gray in the New Yorker described as, “about uncertainty and being embarrassed of your background,” adding, “I was trying to break down the wall between myself and the work.”

Although this will be his first in-person performance with High Zero, Chacon performed in High Zero’s virtual festival in 2020 with Tatsuya Nakatani and Carlos Santistevan.

“I was so in love with everything, and it seemed like a good way to bring different communities together," Tyler says.

This Saturday, September 10th, local record label Shiny Boy Press is teaming up with Le Mondo to bring the city a new music and art festival highlighting homegrown acts you might miss otherwise.